Geological hazard investigations include the monitoring of earthquakes, volcanos activities, fault activities, landslides, land subsidence, coastal change, and hazards caused by other geologic processes. In order to understand the distribution and potential of geological hazards, the CGS undertakes various kinds of geological surveys and studies to provide the essential information for making decision on disaster prevention and mitigation plans.

The CGS currently focuses on the following fields:

Faults cause major earthquakes and hazards in Taiwan. Since 1997, the CGS commenced the investigation of active faults to understand their geological nature, characteristics and recurrence interval.

The goals are as below: 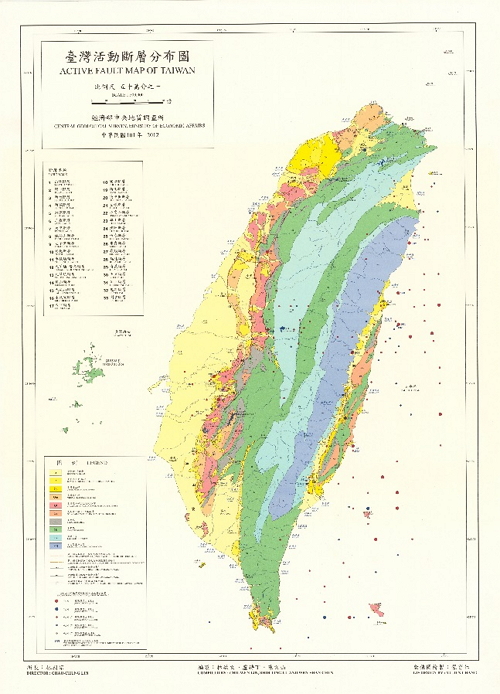 • 1999: Publish the "Surface rupture map and related geological reports of the Chi-Chi earthquake".

Mountains occupy two-thirds of Taiwan's territory and many metropolitan areas of Taiwan are surrounded by slope lands. Due to the steep landform and complicated geological structure, earthquakes and torrential rains, along with heavy subtropical weathering and erosion, often trigger hazardous landslide and debris flows.

Since 1999, the CGS has carried out the following projects:

C. Compilation of information: Compiling all data and information to map the distribution of potential landslide sites and susceptibility analyses.

• 1999 to 2006: Completed landslide inventory and hazard evaluation of Taiwan.

• 2002 to 2004: Completed geological investigation of the Chi-Chi earthquake induced landslides.

• 2007 to 2010: Conducted assessment and monitoring of the potential hazard of geologically sensitive areas.

• 2006 to 2013: Completed geological investigation and established database for the upstream watersheds of flood-prone areas.

Taiwan is located at the junction of plates and has frequent seismic activities. In the plain areas where the groundwater level is high and sediments are loose, soil liquefaction may be triggered by strong earthquakes.

Since 2010, the CGS started constructing the 3D geological information bank of soil liquefaction to make the public aware of its risk and thus to mitigate hazards. In 2016, due to severe damages caused by Meinong Earthquake in Tainan, where massive constructions were destroyed partly due to soil liquefaction. Hence, completing soil liquefaction data and making them available to the public becomes an important task of CGS.

The main works include:

B. Completed hydrogeological surveys and assessing the groundwater resources in mountainous areas

• 2013: Completed compiling results of the survey and evaluation of soil liquefaction areas of Taipei and Kaohsiung cities..